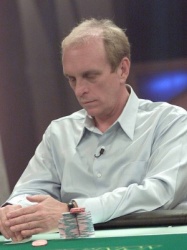 Doyle Brunson: I have lost one of my oldest and dearest friends today. He was one of the most unique individuals I have ever known and poker has lost one of the greats today.

Todd Brunson: I have lost a mentor and friend today. He was like a family member to me.

T.J. Cloutier in einem Video vom WPT Boot Camp:Chip was a real good friend. He helped a lot of people, and I never heard him say a bad thing about anybody. That’s a nice thing to say about somebody. As far as I was concerned, he was the best poker player that ever lived when it came to all-around games.

Barry Greenstein in seinem Audio Blog:Chip was a much deeper person than I think the poker world realizes. He was a real deep thinker. He was a family man like no one else in poker. No matter what the situation was, if his kids had something going on - a baseball game, recital, whatever - he would quit to go to it ... He had always done well enough in poker that he could take time off from poker to be involved with his kids…

Joe Sebok in seinen Blog:Today, poker lost a truly unique individual in Chip Reese. He was unlike almost all other poker players in so many ways, and only those of us who got to see him in a personal light will ever truly know it.I wouldn’t sit here and spin some tale of how well I knew him, as I didn’t really, but that just goes to show how strong his influence was and how valued he was as a person.Chip Reese will be sorely missed by the poker community, for more reasons than most will realize immediately. We are all a little poorer for this loss, and will be for quite a while…

Gus Hansen in seinem Blog:With the utmost sadness and shock I learned this morning that my buddy Chip Reese is no longer among us. The world just got poorer today with the loss of Chip Reese.Although it is almost impossible for me to understand, Chip died last night after a sudden case of pneumonia. What makes it even harder to sink in is the fact that I just talked to him last night around 7 p.m.Chip was not only a world class poker player but also a world class individual and I am proud to call him my friend. Chip was the kind of gambler we should all strive to be.Chip’s experience, good spirit and integrity made him the best ambassador for the game and I am certain that the whole poker community will miss him greatly. I, for one, will miss the fierce competition, our friendship and his guidance off and on the poker table.Chip was extremely gifted and very well respected in the poker world as well as in the business world. His list of achievements is endless with his 2006 WSOP HORSE win as the latest proof of his excellent poker skills.My thoughts and deepest condolences go out to Chip’s family to whom he was always devoted as a father and a father figure. Although it is little consolation, it is my hope that they know of the great legacy that Chip is leaving behind.

Patrick Antonius in seinem Blog:I would like to give my condolences to the family of Chip Reese. I had the utmost respect for Chip. If there was one player that I could have sat behind and watched play, it would have been Chip.Poker lost one of the all time greats and he will be missed by all. If it were not for Chip, poker would not be where it is today.I am lucky that the old timers paved the way for us so that it is possible to make a great living playing poker.